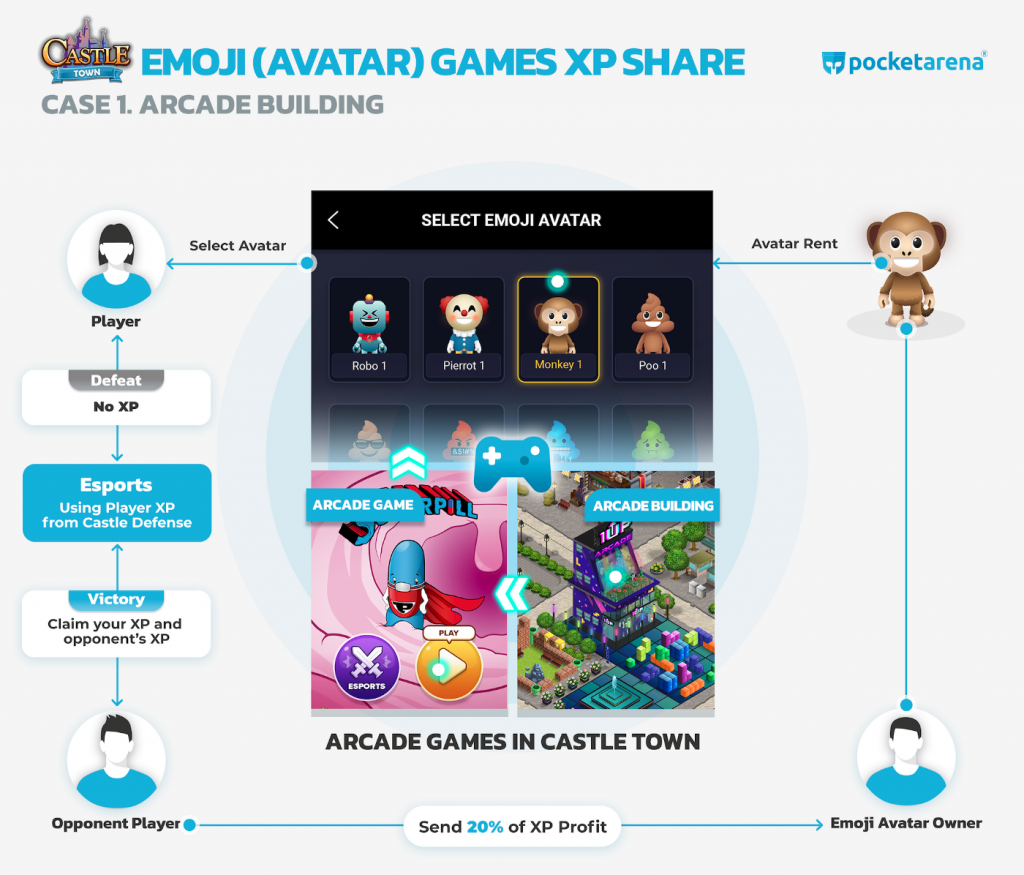 Pocket Arena as a Play-To- Earn #NFT Esports platform aims to fundamentally increase the accessibility and usability of Esports gaming services and provide users with a virtual social life experience within NFT Castle Town. We have discovered that the combination of esports with the metaverse offers quite a number of advantages and rich experiences to our users.

In case you didn’t know, #PocketArena Team which has been a leader in brand gamification in the last 7 years before we jumped into blockchain gaming, developed many casual games (over 80+) for many brands. These games are all in-house developed and all IPs are owned by Pocket Arena Team. We are now utilising our immense gaming assets for Pocket Arena, specifically in Castle Town.

In Castle Town, there will be various buildings such as City Hall, Pharmacy, Police, Restaurants, Cafe, Arcade etc that will be coming into being as the core elements of NFT Castle Town.

This Arcade Building will be the central hub for all casual games where any user can enjoy Esports against other players.

Even in other castle buildings, there will be various gamification and XP earning/burning mechanisms using Emoji Avatars. Here you will need to use Emoji Avatar in order to participate in the Casual Esports. Either you can own yours or rent from other people. If you rent an Avatar from other users, you just need to share XP profits by 20% with the owner.

For example, this Super Pill game will be customised with your Emoji Avatar. You can check how this Emoji Game will be created by using our games studio easily.

According to Bloomberg analysis as well as data from several research firms like Statista, IDC, PWC and more, the global Metaverse revenue was a massive $500 billion in 2020 and presents an opportunity that could approach $800 billion in 2024.

As for the global metaverse in the gaming market, it was still quite robust in 2020 when the pandemic was at its peak and is estimated to register an uber-impressive CAGR in the coming years.

The gaming sector has become increasingly profitable and popular amongst gamers and large user bases spending substantially in this realm. The primary market for gaming and online game makers may exceed $400 billion in 2024.

The convergence of gamification and metaverse will enable consumers to connect and engage based on personal preferences and specific metaverse capabilities.

The already popular games are now emerging with their virtual worlds as extensions of the real world, providing opportunities for social interaction, creating and sharing content, and digital commerce.

As we scan the humongous market, we break down sections that have the potential to boom as we move ahead on the metaverse path

Boosting Esports via a Blockchain-enabled Metaverse

Considering the ever-evolving preferences of consumers in the games industry, certain segments could very well thrive in the coming years.

Before we get to esports and how blockchain could potentially enhance it, we have to understand that currently, blockchain gaming is still relatively green. Per DappRadar, public blockchains only consist of about 1,000 games as compared to the tens of thousands witnessed in the early days of Apple’s App Store.

However, with more games being introduced and adoption barriers being lowered for users, the blockchain game market has massive potential to grow.

Going by the image, the blockchain gaming market is estimated to reach $50 billion, growing at a CAGR of 100% by 2025, which is highly opportunistic.

A new type of blockchain-enabled platform for Esports is bursting on to the scene especially in the aftermath of Covid. Now, the lifestyles have changed and people spend a significant amount of time in virtual online worlds.

Utilizing blockchain and NFT technology, everyone can now enjoy and participate as an Esports team. That is the reason why Pocket Arena has formed its own guild organisation structure where group of pro-players can play against other guilds and the highlights of the match of the day will be broadcasted once Castle Arena kicks off.

Amongst the many influential ways blockchain can totally transform esports is by ensuring legitimacy and transparency.

The blockchain consensus algorithms make sure that cryptocurrency transactions are immutable. For eSports stakeholders, this means the transactions won’t bounce. Heavy investments in the blockchain gaming platforms is bound to make esports central to the metaverse.

The NFT Segment Has Been a Key Enhancer

The integration of Non-Fungible Token (NFT) and cryptocurrencies has to be a major boosting factor in the growth of metaverse. #NFT has played (and will continue to play) an important part in effectively bridging the gap between the metaverse and the physical world and metaverse.

Secured via blockchain technology, NFTs efficiently facilitate social and community experiences in the environment. The segment has seen a massive surge due to NFTs usage in carrying out secure transactions in the metaverse along with purchasing in-game attributes on play-to-earn gaming platforms.

And so, we have witnessed the emergence of multiple immersive play-to-earn games such as Castle Defense that allow gamers to engage in the metaverse and earn revenue.

NFTs in these games enable users to participate in financial economies in the metaverse and get rewarded for their time and creativity. It allows players to exchange their in-game rewards for real money as an integral component of the in-game economic landscape.

Various other platforms are now incorporating NFTs and cryptocurrencies in virtual gaming worlds, allowing players to monetize their time spent in a metaverse.

Pocket Arena — A Prominent Player in This Journey

Pocket Arena is a Play-to-Earn, NFT games portal and platform on blockchain technology for skill-based tournaments and user-generated content merged into the Pocket Metaverse.

A brief history and goal..

Established in 2005, for the next decade, Emoji Games started as a fintech solution provider and mobile game master aggregator for Samsung Mobile’s global embedding project. Since then, we have worked with major game publishers to create a successful and stable revenue of $230M by providing services to gamers and end users. We has been contributing towards the growth of Samsung Mobile and other top players such as Sega, EA, Namco etc.

Emoji Games has developed the unique DIY solution (www.brandedminigames.com) for brands to gamify their marketing campaigns without big budgets and time. We have been working with over 100 international brands who acknowledg our expertise and credibility. Moreover, the META (ex-Facebook) approved Emoji Games as one of their Instant Games partners.

The head office and management are located in Zug in the heart of Crypto Valley in Switzerland. Hyong Kim, the Korean origin founder, has been leading the tech development and design of all product games since the beginning, inculcating trust and stability in the team

The goal of Pocket Metaverse is to create a true web 3.0 ecosystem wherein creators and users can create, develop and trade their own NFT contents and digital assets, and experiences while carrying out day-to-day commercial activities in the virtual world.

Pocket Arena contributing towards the growth

Pocket Arena not only possesses invaluable assets and skills for the evolution of metaverse and gaming but also complies with all the relevant regulations in order to create a level of trust and transparency unlike any other. Here’s how:

For Pocket Arena, the future is now! To make this platform a converging point for esports, blockchain gaming and user-generated content as the Pocket Metaverse is what we have been investing since 2012. 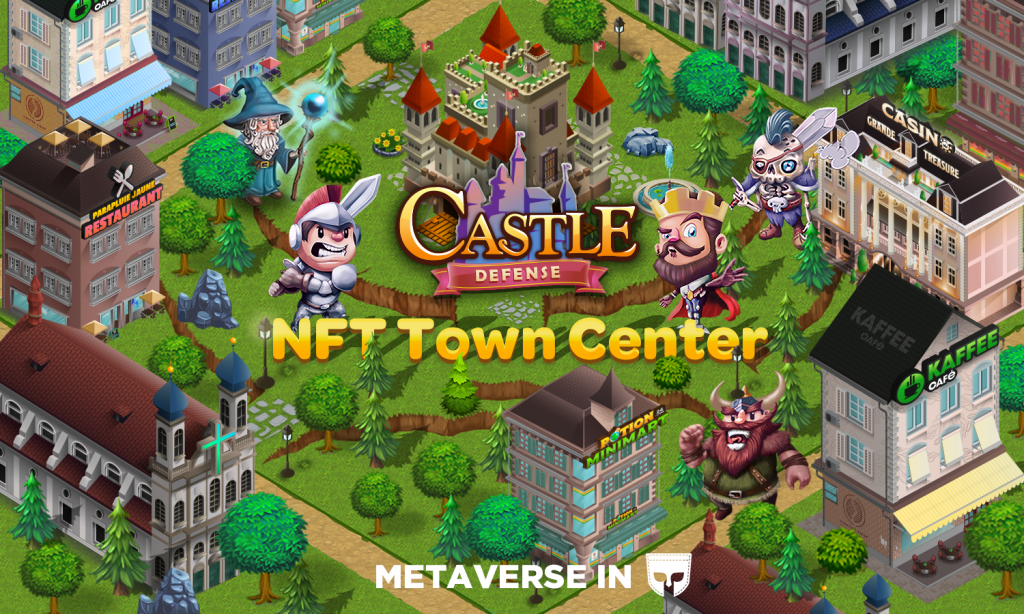 The Metaverse tends to be a buzzword for many successful early-stage projects.

However, what would be the driving force that motivates people to go to the Metaverse and why would people want to spend substantial time and money in the metaverse, especially gamers? Simply put, the answer is ESPORTS.

When it comes to gamers, the Metaverse makes more sense when it is combined with furious battles against other players and real rewards from gameplay. This is the core element of driving gamers into the Metaverse.

Without the introduction of eSports, the Metaverse can be considered a boring shopping center with only spending opportunities, no earning potential, and no competitions.

As for Castle Arena, our upcoming virtual land in Luzern will have 6 different land tiers that NFT Castle owners will be allocated to. As Pocket Arena is truly dedicated in valuing Esports players, we decided not to sell land plots, but rather provide land plots to be taken and benefitted by Esports players and guilds. This was decided from the initial game design.

We believe in rewarding good gaming skills exhibited by pro-players, while not being too commercial by selling land only to those who have enough capital. That is the Esports spirit and the philosophy of the team behind Pocket Arena.

Our journey so far and the plan ahead: 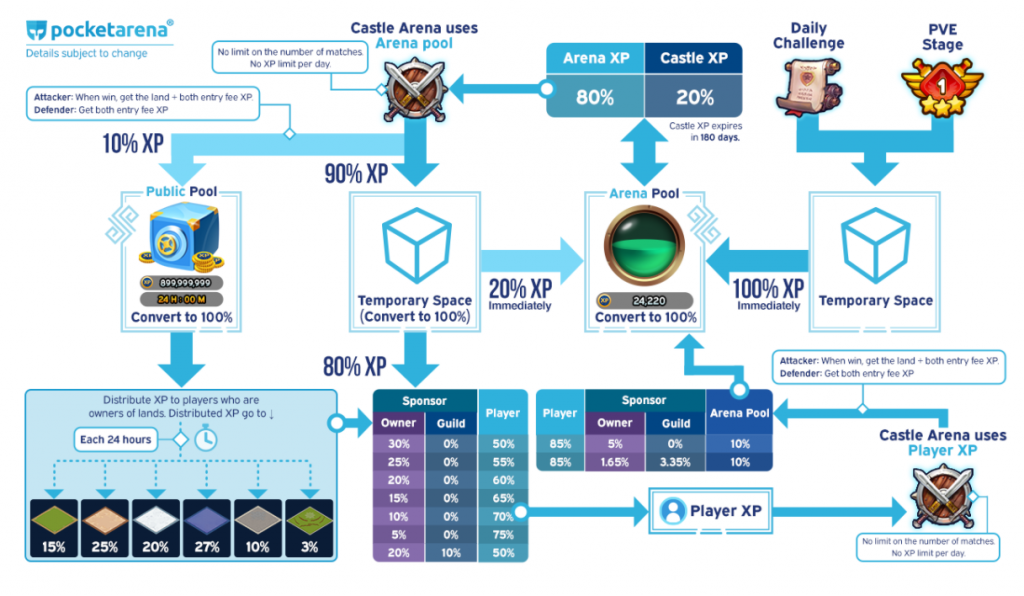 Within the city of 183 land plots, there will be only 28 Castles placed for battle. The 155 plots of the majority land plots are designated as the NFT TOWN CENTER, where the Metaverse components will be introduced.

The Town Center will be a settlement zone for people to do business and trade rather than fight furious battles. Within the City, only 28 Castle owners can attack the King. The “King” land (marked in red) will consist of 4 land plots and there will be only ONE castle owner who could take this “Kingship”. 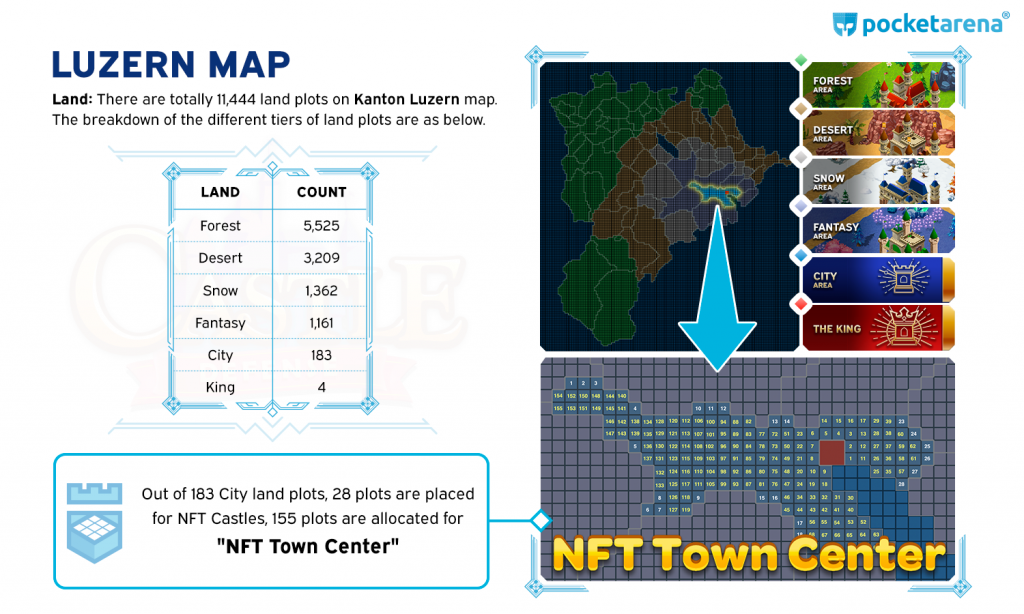 Town Center will consist of NFT buildings, such as a city hall, pharmacy, church, restaurant, cafe, school, casino, metal mining district etc. These town buildings and elements will be implemented as NFTs and available for sale and trade.

The users of these NFT buildings will have to pay a tax or fee for their usage. One of the most interesting components of the Town Center would be a “mining district”, which is the place to mine basic metal resources to build weapons and equipment for knights (players).

Of course outside of the City, there will be lots of PvP battles going on. Additionally, in most land plots, there will be some NFT decorative items that users can purchase and trade to decorate their land plot to attract good ESports players.

Most importantly, for all the NFT items trading, $POC will become the key cryptocurrency to be implemented under the Pocket Arena economy within Q1 2022.