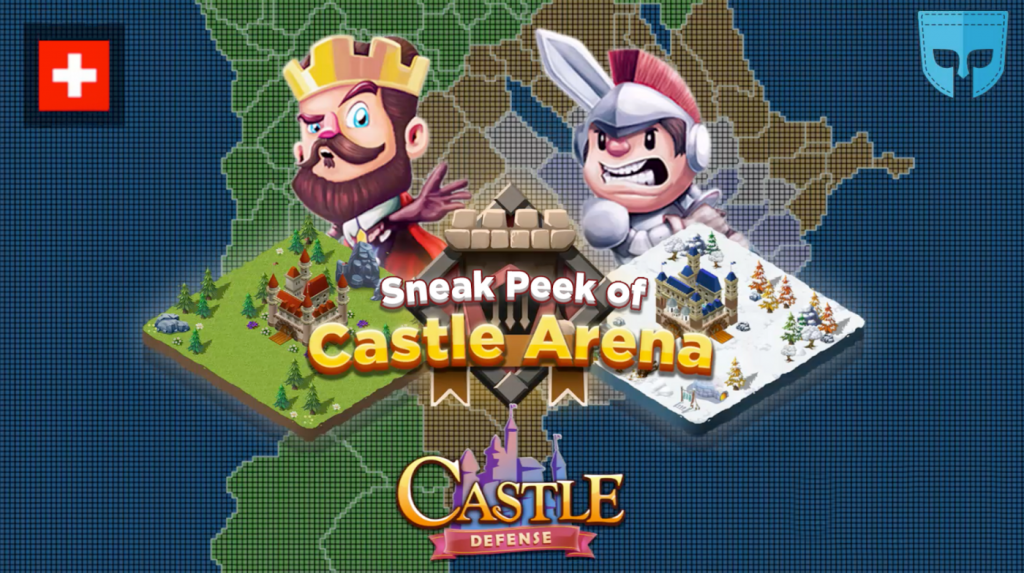 The much-awaited major addition to Castle Defense is here in the form of Castle Arena. In this old-school tower defense strategy game, users can now own land, defend or attack other lands and create or join guilds to plan strategic attacks with 5000 NFTCastles, players and guilds.

All of this action is bound to take place across five playable areas on the virtual map of Luzern, Switzerland. These 5 areas are Forest, Desert, Snow, Fantasy and City.

Castle Defense is about defending the castle with the help of Knights and Wizards. The game consists of Daily Challenges and PvE Battles where players use the default in-game castle or rent an NFT Castle from a sponsor (Castle Owner) and defend it from attackers like Galios, Gargoyles, Demons and more.

Castle Arena is about PvP Battles where you defend your castle’s land and attack other castles with an aim to defeat them and grab their land. Castle Arena also consists of different Guilds, which are groups of players who coordinate and execute attacks strategically. The real eSports PvP model of Pocket Arena will start with Castle Arena.

With the launch of Castle Arena in Jan 2022, the new revenue share framework will be applicable for P2P castle trading. This major change will be explained in another blog very soon.

Let’s walk through some of the key aspects of Castle Arena.

The new menu will see the additions of Arena Pool and Public Pool.

As highlighted earlier, Castle Arena consists of 5 playable areas on the virtual map of Luzern. The first area is the “Forest,” where you as a player can participate in PvP Battles. Here you can attack others and grab their land and also defend your fortress from attacks.

The screenshots below depict the Defend and Attack process for the land battle in the forest area.

You can only proceed to attack the new land only once you have cleared the stages of each land.

These items are required to upgrade your castle’s armoury. Details with regards to the castle items will be out soon.

For every attack created, there is a strategy that is followed. The better you strategize, the more efficiently you will win battles.

Once you have crafted your perfect strategy, you have an option to save it for future attacks or load it for the current attack.

For different stages of game play you can create customized strategies. When you are in the process of creating an attack you are given the choice to select the strategy of your choice.

As shown in the screen below you can choose any one strategy for your attack and also delete strategies if you choose to.

If your attack is successful you will be greeted with the following screen below. The screen will show you the XP earned and shared between you, the Sponsor, XP pool and Public Pool along with the land acquired.

Under the upgrade section in the main menu, we have added the “My Land” tab. Under this section, the player can see the acquired lands pertaining to different playing areas (i.e. Forest Desert, Snow, Fantasy and City)

The player acquires new land by winning the battle.

The Rule of Defense

Defense is about protecting your land from other attacks. If you defend your land successfully, you get to keep your land and get XPs as a reward.

If you fail to defend, you lose your land. In Castle Arena, each land requires a certain number of Defences per day. If you don’t meet the daily requirement, you will lose your land.

The screen below shows you your land battle status, which consists of a list of lands you hold along with pending defenses.

After you successfully defend external attacks, you are rewarded by XP, as shown below.

The land history shows the result of the attack or defense subjected to your land.

When you acquire the status of Kingship in Castle Arena, the following message is shown. The king has special privileges and takes 3% XP from all the battles on the virtual map.

Be aware that your kingship may be challenged by numerous attacks from your opponents day in, day out! So you will need to ally with a strong and faithful guild!

The Different Pools in Castle Arena

Pools in Castle Arena are areas where XP is stored. There are 2 pools, namely Public Pool and Arena Pool.

Arena Pool is a section where the XP earned from Castle Arena and Castle Defense is stored. Arena Pool XP is further used to upgrade the NFT Castle (via Castle XP) and also used to participate in Castle Arena.

Public Pool is a section where the XP earned from Castle Arena PvP battles is stored. Public Pool XP is distributed to players who are land owners

To get a detailed understanding of XP distribution in pools, please follow the article below.

Castle Arena introduces the concept of Guilds whose main aim is to bring pro-players together into organized groups and win battles strategically by XP profit-sharing with castle owners.

The main role of Guild in Pocket Arena

In Castle Arena, a guild is headed by 1 Guild Manager, 1 Assistant Guild Manager who oversee the guild operations, followed by guild members.

Users cannot create guilds by themselves. The guilds are created by Pocket Arena Team (including the initial approval of guild name and guild flag) after due diligence and screening of the guild manager. After the guild is formed, selected managers can manage their respective guild and can update the guild’s name, flag, find and assign castle, recruit/expel members, manage and guide members and set profit shares.

Considering the increase in interest in guilds form different nationalities we have reduced the minimum member requirement from 30 to 20 members. A guild in Castle Arena can have a maximum of 50 members. As of 16 Dec 2021, 47 guilds have been established from 14 different countries (UK, Finland, Germany, France, Philippines, Vietnam, Russia, South Korea, Australia, South- Africa, Romania, China, Thailand, Indonesia) with 1332 guild members who are actively playing Castle Defense.

See discord for details of our guild status.

If you are a manager who wants to create a guild in Castle Arena, please fill in the Preliminary Guild Manager Application form below.

Guild is assigned to a manager who will appear on the Castle Market. Sponsors can view and contact these guilds. In order to create a guild in Castle Arena, a manager has to express interest. This is usually done by filling an application. Once Pocket Arena receives the application, a guild is then created and the guild manager recruits members to increase the guild user base.

Once Castle Arena is launched, users will be allowed to join a guild of their choice. The process will include contacting the guild manager to join a guild.

After joining a guild, the player can contact the guild manager via Telegram chat and ask defense support from other guild members.

The player who has joined the guild will be able to view the Guild’s Castles, check Member Ranking, request Guild Support and Contact the guild manager.

The guild support feature is for players seeking protective support from other guild members. The guilds members can offer support to players who need assistance with regards to attacks and defense from other guilds.

A player who is a part of a guild can also choose to leave the guild. Once out of the guild, the player will not be able to keep the NFT Castle.

There are more functions and features in this in-game guild system and in a new guild management system that are currently under development. We anticipate this may go live a little later than Castle Arena. The launch date is TBA.