Pocket Arena And A Different Type Of Blockchain

Castle Defense, one of the most popular Pocket Arena games, utilizes NFT technology to bring in-game ownership to its users. This allows players to genuinely own the items that they use to conquer the in-game world. It is a key feature of Castle Defense and one that we look forward to exploring in many new games in the future.

This smoothness is because Pocket Prena games utilize a different type of DLT (Distributed Ledger Technology) than other games. DLT is the technology that all blockchain protocols are built on. A distributed ledger is a consensus of replicated, shared, and synchronised digital data spread across multiple sites or nodes. Blockchain can be divided into two broad types: permissioned and permissionless. The majority of cryptocurrencies are built with permissionless blockchain which allows any user across the world to become a node in the network.

It is important as blockchain develops, that different sectors adopt the right type of blockchain to most benefit their market needs. Permissionless blockchains are revolutionary because of the way they address fundamental governance issues. They remove the need for a central authority which is what allows blockchain to create a financial sector that can completely challenge legacy industries.

However for gaming projects like Pocket Arena, common player behaviours and preferences must be considered when it comes to choosing a blockchain type. This is why we use permissioned blockchain integrated with tokenomics. This means that only approved people can run a node to validate transactions. In effect, this creates a hybrid model between decentralization and centralization.

Permissioned blockchain is much more common for enterprises to use such as banking and financial services. For example, in Switzerland more and more financial institutions are adopting permissioned DLT to the point that a new DLT law has been enacted this year. Permissioned blockchain provides many of the benefits of permissionless blockchain including security device management, cost savings, reduced connectivity bottlenecks, contract audit trails, and increased data reliability.

The Future Of Blockchain Gaming

There are many requirements for developing a game that make it necessary to have some form of centralized body. For example, gamers looking to login can often forget their ID or passwords. A governing body is needed to verify and support players like this so that they can retain access to their account. In a blockchain cryptocurrency it is vital that nobody gains access to an account that doesn’t have the password. However, security measures for gaming services can afford to be less strict which introduces the benefits of a central body.

Another issue for centralized games is the unavoidable reality that games are often released with bugs and glitches. This is especially true for beta versions but can even sometimes apply to commercial versions of games. A governing body is necessary to take care of technical issues and guide the game through its full development. Games that utilize a Play2Earn model need particular care as any player issues must also receive financial compensation.

Blockchain games have a totally different set of requirements for DeFi projects. They need to provide more fun and gaming elements than financial elements which is why fast transaction times are essential. Permissionless blockchains (public blockchain) can be quite slow. The Ethereum chain for example, has been known to take up to four hours to process a transaction. This is a lot longer than the one second that most gamers are prepared to wait for a transaction.

Gamers will simply not have the patience to wait for ERC-20 based DApps to process transactions on the Ethereum Network. Gamers need instant speed when dealing with microtransactions as they occur as part of a fast-paced game world. Gas fees and long transactions will simply be unacceptable.

The mobile gaming industry is currently worth $60 billion and the vast majority of gamers still have a preference for non blockchain based games. The quality of games outside of the blockchain sphere is significantly higher because big name developers develop games on traditional platforms. These games are much easier to start playing as gamers don’t have to familiarize themselves with blockchain concepts and tech settings. For example, most gamers will have no idea what metamask is or how to buy ETH or Polygon in order to play games

However, as crypto is adopted across different sectors the general public will become far more familiar with these concepts. This will allow traditional game developers to adopt blockchain and NFTs because the benefits of these technologies no longer come with complications for the average gamer.

The semi-decentralized model made possible by permissioned blockchain seems likely to be the model adopted by these big developers. They will want to implement a model that makes mass market scale up easy while simultaneously retaining enough power to properly develop their own games.

A Network of Protocols

Another key advantage of permissioned blockchains is that they provide the best connectivity to allow games DApps to be connected to different protocols. Blockchain and crypto are developing rapidly and different currencies and projects are becoming integral in the sphere. This will make it necessary for new projects to be able to integrate with many different projects in order to ensure maximum usership.

We utilize permissioned blockchain while building with Hyperledger Fabric (a project of open-source blockchains and related tools) on top of a central database. Both Hyperledger Fabric and the database can be accessed to cross check data to ensure accuracy. Google Cloud Servers, KMS (Key Management Systems), and HSM (Hardware Security Modules) are also integral parts of our project. We have also adopted ERC-20 to make wallet connectivity and listing on exchanges easier. Utilising all these different systems shows how interconnected the Pocket Arena ecosystem is and how many different players can log on and play.

The Pocket Arena Wallet (PA Wallet) on Hyperledger will go live at the end of August or at the beginning of September. Once it’s live, current XP can then be converted into wPOC tokens (wrapped POC) in the PA Wallet. The combination of games like Castle Defence going live with the PA Wallet will very much boost the popularity of Pocket Arena, all while working on a cloud based browser in a user-friendly way. Meanwhile, the process will still be secure and fast thanks to the efficiency of permissioned blockchain. Gas fees will only be incurred when a user wants to withdraw their wPOC or NFT Castles to an external wallet for trading.

As blockchain develops, different industries will utilize different types of DLT. We strongly believe that the flexibility provided by permissioned blockchain will be the foundation of blockchain gaming which is why it has been an integral part of our gaming platform. 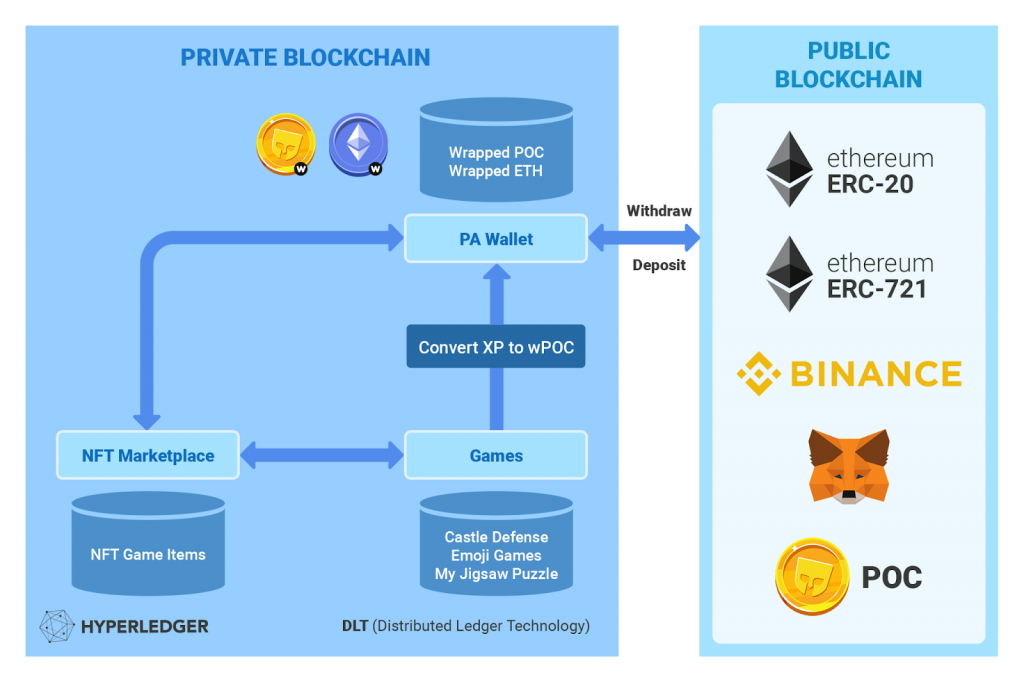