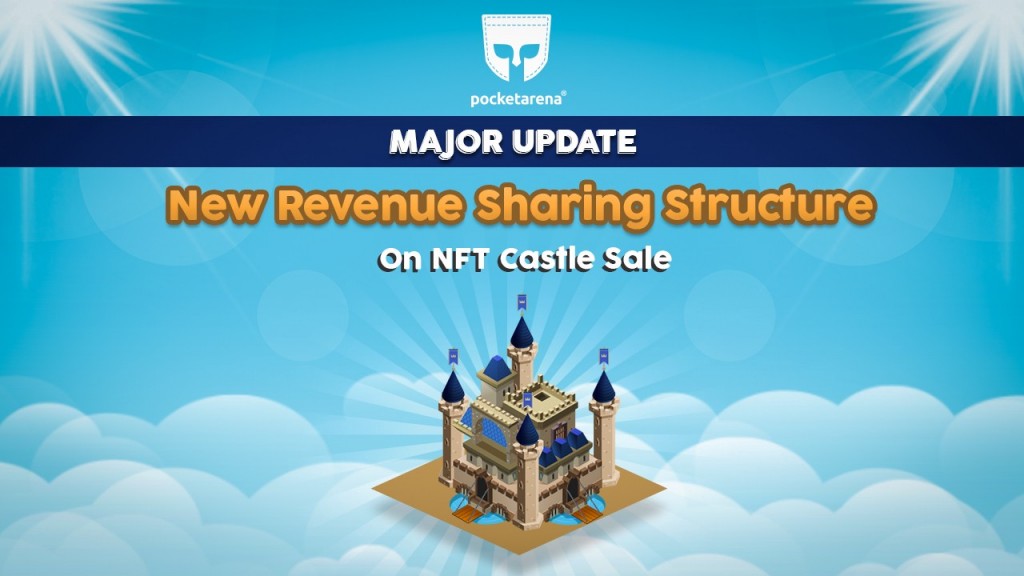 Fresh NFT Castles were being sold at 98EUR along with a limited-time promotion of some initial castles at 48EUR during the first two months in July and Aug 2021. Since then, an XP included NFT Castle has also been traded for max 800EUR in a P2P sale at the NFT Castle Market.

So what happens when an NFT Castle is traded in the NFT Castle Market after Castle Arena is launched?

Since castles are rented out to players who play the game, earn XP and upgrade the castle, there is a current profit-sharing that follows. However there will be a new revenue share framework applicable under Castle Arena mechanism in January 2022. The exact date of Castle Arena launch will be announced soon.

When an NFT Castle is sold in a P2P transaction in the marketplace, 78% of the sale proceeds go to the sponsor, in other words, the NFT Castle owner. 18% goes to the players as the players are the ones who have rented the NFT castle and have increased its value by playing and upgrading it. Furthermore, 4% is charged by Emoji Games as transaction fees.

Under the new profit-sharing structure of NFT Castle sales, there is a gross revenue-sharing that is based on sold castle price.

Benefits to the players under the new profit-sharing structure

After the launch of Castle Arena, there is no revenue shared with the player from the castle sale, under the new profit sharing structure.

The NFT Castle sale, new revenue sharing structure will be applicable to the castles which have gone through the P2P trading AFTER Castle Arena kicks off.

The contributions from players under the old revenue sharing program will stay there for the old profit-sharing until the new trading takes place after the launch of Castle Arena (estimated launch date is mid to late Jan).

Besides, as announced previously, the cap of NFT Castle sales price will be increased to EUR 3000 by using POC as the payment method. Credit Card payment is still possible but will be limited to max Castle sale price of EUR 800. The waiting period of 6 weeks will still remain applicable for credit card P2P payment due to stolen card dispute issues. When POC is used in payment, the waiting period will be lifted.