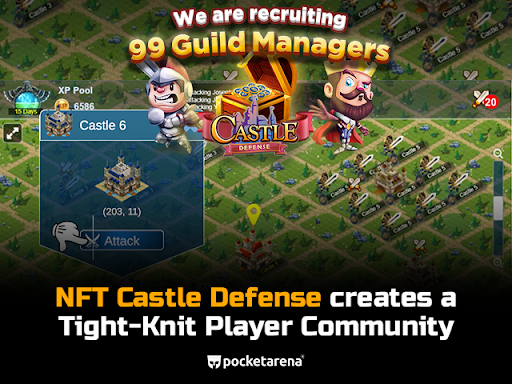 The rise of the decentralized games network is creating a new type of gaming community and a new type of gamer. In the past, our Emoji Games company has gained a lot of experience releasing traditional stand-alone mobile games. As a centralized body distributing the games, we were quite often the target of rude outbursts from our users. Despite our best efforts to keep our customers happy, it was nevertheless inevitable that we would receive one or two calls from irate impatient customers demanding an immediate refund. This created the need for a huge 24/7 customer support team that could provide help to our customers whenever they needed it which was of course, an expensive undertaking.

However, as we have migrated to blockchain gaming we have noticed this paradigm completely shift. Since blockchain gaming rose in popularity with games like Axie Infinity and Yield Guild Games, it has brought with it an entirely new way for gamers to interact with developers as there is now no longer a clear distinction between customer and seller.

For example, Pocket Arena provides and develops the games and the platforms. However, every person involved in our platform is an important part of a self-sustaining gaming economy. There are different ways for users to contribute to and profit from this PlaytoEarn economy. Users can profit from their gaming effort by selling the digital assets of NFT Castle that they earn in our Castle Defense games. They can also be a key part of the ecosystem by mining tokens. This is an ecosystem that everyone involved can benefit from.

The shared economy that surrounds our gaming platform was not developed to only benefit Emoji Games or our investors. The integral part of Pocket Arena’s economy, and hopefully the main benefactors are our gamers. You create the value of Pocket Arena and the platform is designed to incentivize you to continue contributing. Our vision is to give glory back to the gamers and empower them with the possibility to profit from their own gaming ability.

This is an especially attractive prospect for those of you who have been criticized for spending much of your day in front of a video game. No longer do you have to listen to people tell you what a waste of time it is. Blockchain gaming gives you the opportunity to take your finely honed skills and apply them to a task that can yield you financial reward. Now you can be an integral part of a mutually beneficial economy.

This type of economy gives players the sense that they themselves are closely linked to the games they’re playing, and the developers who developed them. One thing we found about this type of close-knit community is that it does not breed the type of angry customer that we have encountered in the past. Our players are our investors and they are committed to making Pocket Arena better instead of asking for a refund and looking to get out. This is a much better type of community to be a part of and another key reason why blockchain is the future of gaming.

NFT Castle: How To Build An Online Community

Our most prominent blockchain game, NFT Castles, is a great example of the type of mutually beneficial ecosystem that crypto gaming can produce. The NFT Castle economy is tied to the value of the in-game NFT castles that can be used to claim land and enhance your ability to earn more digital assets. eSports digital assets are the weapons and items that can help you win the game and gain more assets from other players by attacking other players. NFT Castles are no exception. The more you use your castle the stronger it becomes. The stronger your castle becomes the more likely you are to win the battle and grow your assets.

This dynamic has led to a huge demand. The castles are sold out less than a minute after they are listed in the Castle Market. All of these castles are unique that can benefit you during the in-game battles in a unique way. Currently, thanks to a 50% discount until August 31st, newly minted castles are being sold for €49. However, several P2P transactions have occurred that have seen castles change hands for more than €500. This 10-fold increase is a perfect example of the benefits to holding digital assets that have in game use cases.

Castles are a highly liquid digital asset in the digital metaverse. Committing time to this game will see a player compensated as they increase the power of their in-game items and increase their in-game land. Different types of land will see a player earn different levels of XP by capturing it. There are six different levels of land, King, City, Fantasy, Snow, Desert and Forest.

Players can choose to fight independently against other castle owners to acquire land or they can become part of a guild. A guild is a group of professional players that are trained to fight together against other guilds and can be hired by other landowners. They are another example of how we are building a tight-knit community that will work for their own mutual benefit. Players will be able to receive training and additional XP earnings as part of a guild. Each guild will have a manager, an assistant manager, members, and trainees with each position yielding a different level of XP. It allows players to grind more efficiently and increase the value of their assets.

A key part of our economy is allowing investors to rent castles to professional players and having them both share in the benefits yielded from that Castle. The guilds create an entirely new way for investors to benefit from the NFT Castle economy. Investors can choose to rent their castles to a guild instead of to an individual. Players involved in a guild can then use these castles in the name of their guild. The bonuses associated with fighting for a guild then trickle down to benefit the investor.

By integrating these guild structures into a castle defense game, Pocket Arena’s NFT Castles is an experience that combines the best of both Axie Infinity and Yield Guild Games. The details of our guild system and other features related to NFT Castles are getting finalized. If the type of community that we are building here is something you want to get involved in, keep an eye out for our master plan which will be published on August 31st.