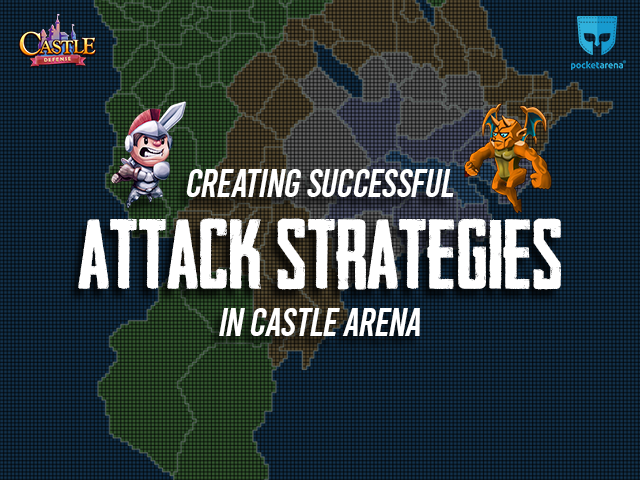 Castle Arena is our PVP version of Castle Defense where users battle out on the virtual map of Luzerne to acquire precious lands and ultimately claim Kingship. Like in any battle (or game) it’s important to win in order to proceed further. And in order to win the battles, strategies are very important.

In Castle Arena, battles are won by attacking and defending. When it comes to attacking other land owners, we have created a section where users can fine-tune their attacks and direct troops to achieve the goal.

Why is an attack strategy important?

As highlighted earlier, strategies are important to win battles. A good, well-crafted strategy separates the player from the pack. In order to move across levels in Castle Arena, it’s important that the player plans their strategies well. This involves assembling troops and formulating attacks on various paths. We will talk about this later in the article.

In order to get ready to attack, it’s required that the player has XP in the Arena Pool. Once you are on the land map of Castle Arena, you are free to choose your battles.

Clicking on any knight on the map will show a pop up where the player will be presented with 2 options, one to Scout and the other to plan the Attack.

In Castle Arena before planning an attack the player is given an option to Scout. Scouting allows the attacker to check the castle’s armoury and upgrades. Accordingly, the attacker can decide whether or not to go ahead with the attack. The figure below shows the scout feature.

Clicking on Attack will lead the player to the screen to Create An Attack. Here the player can check the entry fee required for the attack, the stage selection and strategy selection as shown in the figure below.

Once the player has selected the stage, they can proceed with selecting their attack strategy.

The quick attack strategy helps the player to automatically go ahead with the default troops arrangements for the attack. After selecting Quick Attack Strategy, the player will be taken to the next screen where the default monsters for the mission will be displayed.

Clicking on Load will lead the player to the next screen where they can review the waves in the strategy. Clicking on Deploy activates the attack, where the opponent will have 12 hours to accept the player’s attack or lose the land.

A custom strategy can be created by selecting on New Strategy. In this type of strategy the player can deploy troops manually after selecting the stage of their choice.

When you select New Strategy, you will be presented with the screen that shows different paths at the bottom and the wave number at the top. The number of paths and waves are different for each stage as mentioned earlier.

Let’s say you click on path 1, this is what will be displayed:

You can select your monsters for each wave.

What’s interesting is each attack wave has a minimum and maximum limit (top left) pertaining to the number of monsters one can deploy in that particular wave.

Moreover, the next wave will always enable the player to deploy more monsters than the previous one. See pic below:

So accordingly, one can choose the horde of monsters for each path and wave, and build a decisive strategy.

Castle Arena is set up in a free to play ecosystem. Being a classic tower defense game, it’s important to formulate effective battle strategies. Good strategies will help players to win and in return gain valuable XP.

There are different types of XP generated in Castle Arena. We have introduced a new XP system and the detailed explanation can be found in our whitepaper here.

Earning XP in Castle Arena follows a series of steps. It first starts with renting an NFT Castle to play Castle Defense. XP earned from each stage at Castle Arena is divided among the Castle and the Arena Pool as per the new XP Sharing system. Then with the help with the XP in the Arena Pool, the player can wage battles with other players and gain precious land as well as personal XP, which can be converted to bPOC.

We will cover this topic of XP earning extensively in our next article and will update there. Stay tuned to our official TG and social channel to know more.