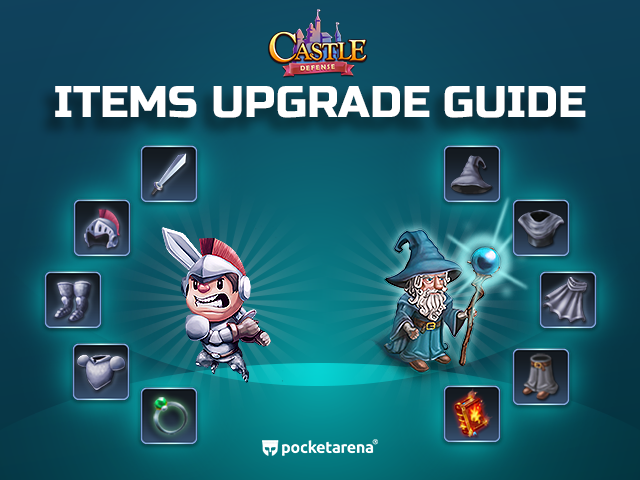 In-game item upgrades are important if you want to progress from one level to another in any game. Upgrades give you an extra edge over the competition and allows you to strategically plan your attack.

Castle Defense fans will know the two popular characters of our flagship game. The Knight and the Wizard, who are essential in battling across various land stages of the game along with the Cannon Tower and the Lightning Tower.

In this post we will talk about the Knight, the Wizard and the towers featured in Castle Defense and their items upgrade. Read to know more.

What is a Knight?

Brave Knights will fend off a spectrum of monsters marching towards your castle. Nothing is better than a traditional mounted armored soldier when it comes to close combat. Equip this defender with multiple items in order to enhance his battle abilities, both offensively and defensively.

What is a Wizard?

Gallant Wizards will cast powerful spells on enemy hordes and protect your castle from damage. Wizards come in handy when resisting attacking monsters from a distance. As you progress in the game, you can equip the Wizard with various items by using your XPs, upgrading his abilities as well.

There are five items if a player wants to upgrade the Knight. The items available are as follows:

A steel sword that’s designed for battles against monsters.

The helmet covers the head of the Knight and offers a great protection against damage.

A steel chest that’s designed for brave knights who battle monsters at the forefront.

A pair of heavy iron boots better suited for knights.

A rare piece of jewelry that brings immortality to its wearer.

There are five items if a player wants to upgrade the Wizard. The items available are as follows:

A staff made from the branch of an ancient tree which holds vast magical powers.

A mystic hat, made specifically for wizards, to boost their attack speed.

An exclusive robe for wizards that protect them from various dangers.

A pair of leather boots better suited for wizards.

A book containing a powerful magic of fire for magicians.

Lightning Towers are very effective against aerial attacks, but less effective against ground attacks. By equipping Storm Tower item, Lightning Towers can be upgraded which inturn  improves the chain power and range, as well as create a static field around itself to strike all incoming enemies at max level.The amount of damage and attack range of a lightning tower is more than that of a cannon tower.

XP is required in order to upgrade the knight, wizard and towers with additional items. These upgraded items will enhance damage, attack speed and range thereby allowing players to complete land battle stages and progress to the next round.

The following table below lists out the amount of XP required to upgrade the Knight, Wizard, Cannon Tower and Lightning Tower.